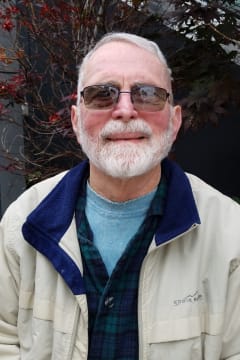 Born in Medford, OR and died in Fremont, CA. A 19-year resident of Niles Canyon Mobile Estates, Evan passed on April 9 after a 4-month struggle with diabetes-related complications. In his final days, he was surrounded by his family, who meant the world to him.

Evan was raised by his parents Philip (a Mortician and General Contractor) and Juanita Trout (a Mortician and porcelain painter) in Escondido, CA. He became a barber in the 1960’s and moved to the Los Angeles, CA area where he was a small business owner for 10 years. Later he attended a trade school for HVAC and worked in Maintenance for the White Memorial and Glendale Adventist hospitals for more than 20 years where the nurses called him "Mr. E-bon" and included him in their potlucks. In 1984, he helped build a school as missionary work on Majuro (Marshall Islands). He sang in the choir at Alhambra SDA church. Evan retired in 1998 and moved to Fremont, CA to be close to his son in 2003.

He was a patient and loving partner to his spouse, Marilyn, and was a kind and dependable father to his son, Chris, who he adopted from the island of Guam. Evan loved working on/driving/talking about cars, listening to Dodger baseball games on AM radio, picnicking in the park, cycling, traveling to Hawaii and listening to Hawaiian music, photography, eating Japanese food, playing on his computer, and socializing with friends. He never had anything bad to say about anyone, and always placed the needs of others before himself.

Evan is preceded in death by his brother, Earl, and Marilyn Mae Trout, his wife of 37 years. He leaves behind a son, Christopher (Jo-ann) Trout.

A Memorial Service will be held at 1pm on Saturday, April 23 at Fremont Chapel of the Roses located at 1940 Peralta Blvd, Fremont, CA 94536.

In lieu of flowers, please send memorial donations to the American Diabetes Association in Evans name.