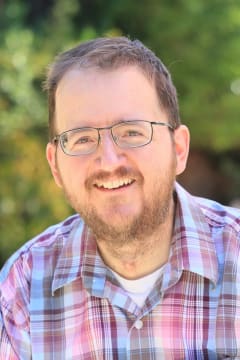 Jeremiah "Jackson" Perdue, 41, of Fremont, California, lived his life in service to his Lord and Savior, Jesus Christ. He went to his eternal home on August 17, 2022. He succumbed to Oligodendroglioma, a brain cancer that took much of his energy, mind, and body in his last years.

Jackson was born on September 23, 1980 to Jon and Brenda Perdue in Fremont, CA. After graduating from Washington High School in 1998, he went on to study History at California State University in Hayward, California.

His love for God and learning led him to become a youth pastor and substitute teacher soon after graduating from college. He taught continuation high school as his passion for writing, learning, and teaching grew. After attending Golden Gate Seminary where he received a Master’s in Theological Studies, he went on to serve as the Family Pastor at Resonate Church in Fremont.

Jackson met his best friend and future bride, Janelle, in 2003. They married in 2004 and moved to Hacienda Niles shortly after where his family still lives. This has been the longest he lived in one home after experiencing many moves as a child. They welcomed their first daughter, Belle, in October 2006. Juliette joined the family in October 2009. Fiona, whose life symbolizes a step of faith for them, came shortly after in February 2011.

In lieu of flowers, the family requests donations are made to an organization that Jackson believed in: "Foster the City", a coalition of churches providing loving homes for children in foster care. In honor of Jackson’s passion for Jesus and his Gospel-motivated life of love and compassion, you can give at Foster the City or by sending a check to 1172 Murphy Ave Suite 212 San Jose, CA 95131. Checks can be made out to “Foster the City” and all donations will help vulnerable children and families in crisis. Whether giving by check or online, please include the memo: “Jackson Perdue Memorial Fund”. Thank you.