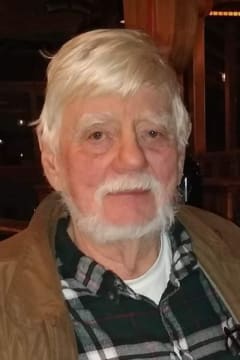 James Thomas Cunningham (Jim) passed away peacefully in his home in Newark on Thursday, July 21st, 2022 at the age of 79. James is survived by his wife, Katie, his 6 children, Russell, David, Laurie, Jeanie, Wendy and Mark, his nephews, Kevin and Jeff, John and Doug, his 10 grandchildren, Andrew, Vanessa, Rowan, Thomas, Brian, Garrett, Zachary, Maxwell, Alex, Tony, and his great-grandchild, Zola. He is preceded in death by his parents Thomas Dansby and Mary Lena, and his brothers, John Edward and George Allen.

Jim was born on January 21st, 1943 in Selma, Alabama. The family moved to Montgomery two years later where Jim attended Sidney Lanier High School. He attended trade school in Atlanta for drafting. After graduation he joined the US Army in 1962, serving in Germany at Herzo Base near Nuremberg. Jim moved to California in 1964 where he lived in Oakland with his first wife and started a family. Using his G.I. bill, Jim bought a home in Newark and enrolled in college. While working as a draftsman, he acquired a General Contractor’s License in 1970 and started Cunningham Construction Company. In 1988, he married the love of his life, Katie Lou and they shared many adventures together while he worked in the Bay Area doing remodeling and room additions until he retired.

Jim was a devoted father and friend, sharing his kindness and his craftsmanship with any and all who asked for help. He contributed his expertise to many projects at the St. James’ Episcopal Church where he and Katie were loyal members. He was a member of SIR (Sons in Retirement) as well as a friend of Bill W. for 36 years.

Jim had a passion for gardening and fresh food. He helped publish the St. James’ cookbook, while perfecting his biscuit recipe for his new book, ‘Cooking for Two,’ which will be completed by his children. It was his family that brought him the most joy. 34 years with the love of his life, 6 wonderful children, 10 beautiful grandchildren, 1 precious great-grandchild; truly a life well lived.

A Celebration of Life will be held on Saturday, August 13, 2022, at 1:00PM at St. James’ Episcopal Church with a reception to follow at the parish hall. In lieu of flowers, please make a donation to St. James Episcopal Church.