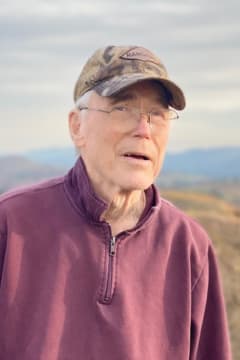 James Michael Wilson was born on May 25, 1939 to William James Wilson and Holly Lucille Mason Wilson of Planada, CA. He grew up helping in the family general store there as the oldest of 4 children. His siblings are William (Bud) Wilson, of Louisiana, Diane Wilson of Fresno, CA, and Robert (Bob) Wilson of Friendswood, Texas.

As a youth growing up in Planada and eventually attending Le Grand High School, Jim was highly competitive in everything he did, as evidenced by being selected as captain of both the varsity baseball and basketball teams. Jim earned the honor of class valedictorian and as rumor has it, was also known to ride his Harley-Davidson motorcycle to school.

An accomplished marksman, earning the honor of Distinguished Rifleman, Jim enjoyed spending time with his father travelling throughout the Central Valley competing in various rifle and pistol shooting contests.

Jim graduated from Fresno State and married Bonnie Southward on February 22, 1964, before relocating to Walnut Creek, CA. He worked briefly as a police officer and then as manager of the sporting goods department at Montgomery Wards in Pleasant Hill, CA. They had 2 children and moved to Fremont, CA where they lived for over 50 years. Jim worked at General Motors in Fremont for 18 years in various management positions (Personnel, Labor Relations, Safety) and was HR & Benefits Manager at the time of the plant closing. He retired at 49 years old. He then opened a franchise location of Mail Boxes Etc. (now the UPS Store) at the Fremont Hub, ultimately becoming one of the top 5 stores in the nation.

Jim was active for many years managing and coaching his son’s baseball teams at Centerville American Little League.

Jim was an avid golfer and enthusiastic member of Koaches Golf Club for many years. He thoroughly enjoyed each and every outing, and his trophy for winning the Club Championship while competing in the Fremont Park Golf Club, was one of his most treasured awards.

During this difficult time, family and friends take solace in knowing Jim and Bonnie are reunited once again – forever.
In lieu of a public memorial and flowers, the family requests that donations be made in his memory to the American Cancer Society

Email comments are welcomed to : sawtooth516@att.net