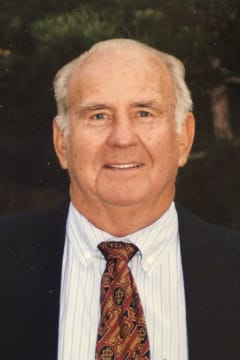 Norm was born May 5th, 1935 in Cedar City, Utah to Laura Christina Johnson and James Reed Prince. He was the second of four children. He grew up in New Harmony, Utah, attending classes in a one room schoolhouse through the 7th grade. He went to Cedar City Junior high and High school where he met his wife to be Kathryn Marlene Hanzon. They were married August 10, 1957 in the St. George temple. Norm went on to attend Utah State University where he earned his Master’s Degree in Education.

Norm was a well loved and respected high school educator and coach for 38 years. He coached football, golf, wrestling, and other sports. He spent most of those years at Tennyson High School where the athletic stadium was later named in his honor: Prince-Serrano Stadium.

His love of gardening, passion for woodworking, and willingness to serve were enjoyed by many. He was an active and faithful member of The Church of Jesus Christ of Latter-day Saints. He served in many ward and stake positions, and he and Marlene served together in the Oakland Temple Baptistry for 14 years.

He was preceded in death by Laura Christina and James Reed Prince (parents), and Ronald Prince (brother).

A funeral service will be held at The Church of Jesus Christ of Latter-day Saints, 36400
Haley Street, Newark, CA on Friday, October 28 at 10:00am.