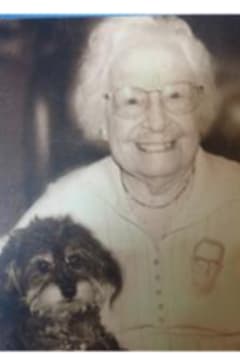 Ruth was born to the late Frank and Evelyn Palmer of Kansas City, Missouri. It was a second marriage for both her parents and they brought seven children of their own to the union. Ruth and her brother, Frank, were the youngest and very close. Although they struggled through the depression, Ruth had a happy childhood, with the older siblings helping when they could.

After the war, they lived for many years in Kansas City, Mo, surrounded by extended family and many friends. They even branched out to Wichita, Kansas for four years, where Bill sold popcorn machines and supplies. In 1955 they moved to South Gate, Ca., for General Motors where their boys finished school. Finally, Bill took a position setting up the new GM plant in Fremont. They bought a house on Higgins Way and enjoyed the empty nest and warmer weather of California, until Bill passed away on November 19, 1988. During those years, they traveled twice to Europe, Hawaii, and took many road trips. After losing Bill, Ruth continued to bowl, travel and garden. She took her best friend on a tour of China and her sister to Hawaii. Ruth continued to live in the same house that she loved until she passed away at the age of 104.

Ruth is survived by her son Richard and his wife Judy, and her son William and his wife Barbara. She has four grandchildren from each son: Kathy of Portland, Oregon, Debbie of Rochester, Minn., Barbara of Half Moon Bay, Ca. and Susan of Denver, Co.; and Michael of Los Angeles, Audra of Long Beach, Ca. David of Long Beach, Ca., and Diane of Phoenix, Arizona. She is also survived by nine Great Grandchildren and six Great, Great Grandchildren. Ruth has many “honorary” grandchildren in California, also.

Ruth was a wonderful matriarch of this Guettler family. Her character, wisdom, generosity, and love will be her legacy. She was there for her family always, whenever needed. Her personality and kindness will be remembered by many friends and neighbors, past and present.

A Memorial Service will be held on Monday, July 11, 2022 at 11:00am at Fremont Chapel of the Roses, 1940 Peralta Blvd., Fremont, CA. Her ashes will travel to her son, Richard and family, in Denver, CO for another Memorial Service on August 13th, then she and her husband’s ashes will then be interned at Mt. Moriah Memorial Park in Kansas City, MO. They will rest together between the Guettler’s and her mother, father, and brother. May they rest in peace together.

One of her granddaughters described her as the sweetest person on the planet. Most people would agree.

In lieu of flowers, the family ask that donations be made to: